UPDATE – 02.14.13 – v0.2.6
ISSUES:
-An API change has made the addon not load. It has something to do bpy.scene.context. I’ll look into it when I have a chance. Fortunately the script will still run as a regular script. If you want to use it, just use the .blend file below or just load it in the text editor and hit run.

UPDATE – 06.20.11 – v0.2.6
FIXES:
-Moderate speedup.
-Cubes output scale/loc corrected.
-Tooltips added.
NEW FEATURES:
-Container insulators: Arbitrary mesh shapes can be used as insulator/cloud objects. Still quite imperfect though. May slow down generation. Best for simple containers; bowl, cup, bottle. A spiral pipe would not work well. Must have rot=0, scale=1, and origin set to geometry.
-Mesh origin objects:. If the origin obj is a mesh, vert locations will be used as initial charges. However this will disable multi-mesh output. May slow down generation. 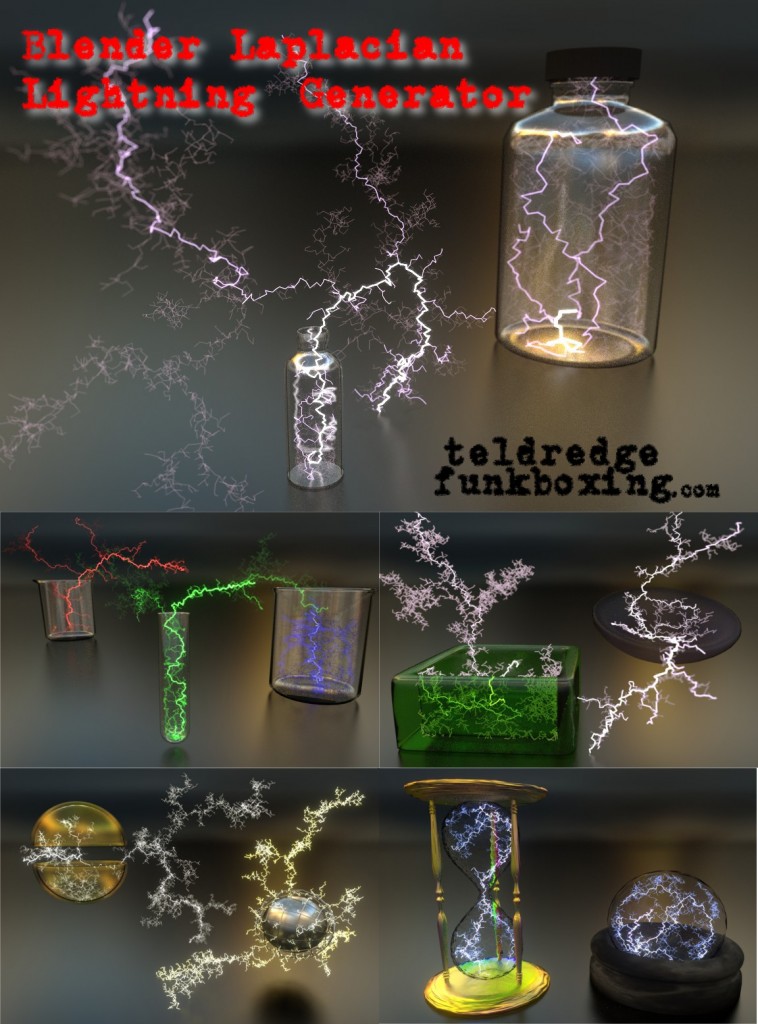 It currently uses simplified spherical boundary conditions and calculates potential at candidate growth sites using FSLG-Eqn. 9
To be properly influenced by an environment map of charges and
allow artistic manipulation of growth patterns I will need to
implement FSLG-Eqn. 15, which I don’t fully understand yet.

As compared to the simulation times reported in the paper, there is no comparison. This is not fast. They report 2000 particles in 6 seconds. So far 1000 particles will take a few minutes.

A good chunk of the reason for the slowness is the weighted random choice function. Another big reason is it’s python not c. Probably the biggest reason is that I’m a hack and I barely cobbled this together so it’ll take time to get it optimized.

Anyway I think it’s better than making lightning by hand, or at least might give you a good base mesh to mess with. So it might be useful to someone. I’ll keep working on it.

DIRECTIONS:
you can use the example .blend file or load as an addon.

ADDON:
-Download script (object_laplace_lightningv026.rar) [this version of the addon only works with Blender 2.5 – 2.62]
-Download script (object_laplace_lightningv027.zip) [this version of the addon works with Blender 2.63+]
-Uncompress, Place in in Blender ‘addons’ folder:
Blender install folder/2.6x/scripts/addons/
-Enable addon
UI will be in >View3D>Tool Shelf>Laplacian Lightning (object mode)

-Play with the settings, try again.

Hope you enjoy. Send me a link to some renders if you use it! Especially if you get >10,000 particles.