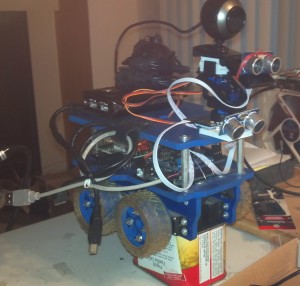 Dominar Rygel XVI has had a tumultuous development cycle. I purchased the basic platform and servos with the idea that I would create a semi-autonomous robot capable of SLAM and Face Recognition running Raspberry Pi and Arduino. Well that may still happen, but I ran into some limitations on the Raspberry that I can’t get past yet. Just to be clear- no complaints about the Pi, I just didn’t spec out my hardware well enough (or at all really) before I started piling tasks onto it.
There’s a good chance I’ll be harvesting some of Rygel’s current parts for another project soon so I wanted to get his pretty mug up online because why not.
PARTS:
(1) Arduino Duemelinova
(1) Raspberry Pi (Model B – 512Mb RAM – Raspian Distro)
(4) Parallax Continous Rotation Servos
(2) HCSR04 Ultrasonic Rangefinders (one pan/tilts with camera, one pointed at 45degrees down to detect changes in ground level.
(1) Gyro (not implemented yet, originally he had a 6DOF but I pulled that to use on Tweedle and ordered and 9DOF sensor for Rygel
(2) 9g Hobby Servos (pan/tilt camera)
(1) Webcam
(USB 4 port Hub, USB Battery pack, and a little speaker)
I got pretty far in understanding R.O.S. Groovy and even wrote a couple of message types and nodes and they worked. In the future I think R.O.S. will be a very powerful tool and I’m glad I got some exposure to it already. Just turned out the Pi didn’t have the juice to run R.O.S. with all the bells and whistles I wanted. Next time I’ll start with a more powerful processor.
Arduino / ROS CODE and NOTES