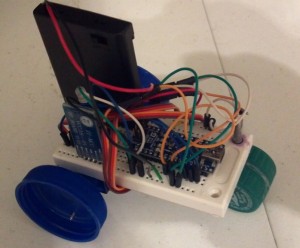 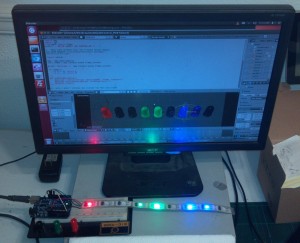 I have to post this because I don’t know any other way to get in touch with this tech super-hero to say thanks for his work.

Hey Eirik Taylor, thanks buddy, you’re an inspiration and an outstanding reference.

You gave me a huge head start with the Android code for your BT car. I’d still be struggling with the BT Chat example in the SDK if it weren’t for all well commented code.

His website has a bunch of great projects and his documentation is awesome and he posts all his code.

Thanks again buddy, hope you read this and it makes you feel warm and fuzzy.

Then some foamcore, paint, and hot glue.

I’m using a android bluetooth terminal program to send serial commands to the arduino. Right now the program just calls ‘Modes’, which are different effects I hacked together in the arduino IDE. Later I’ll write a more versatile program so you can more directly control the LED’s with an Android app or something.

FYI – The Q is for Quixote Studios.