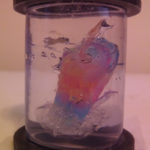 The balsa glider is a wily and shy creature in the wild. Few corporeal entities have seen the delicate beauty of a freshly unwrapped gliderling catching its first updrafts among the Cherenkov tulips in their quasi-quantum development stage.

I’ve been fascinated by this elusive species for some time and have spent some time developing a system to track, capture, and preserve balsa gliders in a state visually identical to their natural environment.

The gliders are treated very humanely and respectfully throughout the taxidermy process. Though it does end with their dead little balsa frames suspended in a matrix of acetoxy silicone, balsa are intensely vain beings so they don’t actually mind being murdered as long as they know they’ll leave a beautiful corpse.

I have documented a few steps in the process. This image shows the my team of trained domestic gliders immobilizing a wild juvenile glider by laboriously explaining the concept of token currency.

This is a side-by-side of a real Cherenkov tulip and a decoy made to capture wild gliders, and subsequently used in the final glider display.

Here is the glider and tulip in the freshly poured astral preservative compound, which suspends physics indefinitely when properly cured inside a corectilinear third-order hypercylinder.

Here is an unnecessarily long video of the final taxidermied balsa plane with scene accents and lighting.

It’s actually one of the SPACE tubes at the end of the last post video, but I put it in a more permanent fixture and it’s got the tiniest balsa plane I’ve made yet and I thought it deserved more attention.