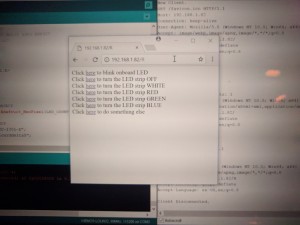 So I’ve been using Arduino Nano’s for a long time and my communications were pretty limited to
bluetooth and IR. I always wanted to use WiFi connection, but the expense and effort to integrate WiFi with Arduino was never really worth is. Enter the ESP8266- I actually made a few attempts to use it as a drop in replacement for the bluetooth modules I’m using, but I never got anything working the way I wanted.

So then I start seeing these ESP32’s and they look pretty sweet, but I wasn’t sure I wanted to take the leap when I was so comfortable in my little Nano world.

Then I see the Lolin32 ESP-32 board, with one major thing that set it apart- the battery connection and charging circuit. Game changer for me. I’ve been using USB battery packs forever because they’re pretty self-contained and nothing I could hack together would be as good as just plugging in the USB, but now I’ve got options.

So I got a couple of these Lolin32’s and I’ve had about a week to poke at them. I finally got a few of the puzzle pieces turned over so I think I’m ready to start redoing the old bluetooth LED FX stuff for the ESP-32.

So this post is mostly just to make notes and such so I don’t forget and maybe they’ll help someone else trying to get started with these chips.

Here’s some pics of my ‘first light’, got a little strip of LED’s controlled via a simple web server on the Lolin32.

NOTES \ STUFF I’VE FOUND SO FAR
~FastLED library isn’t there yet. They just updated it with ESP32 support but I still couldn’t get it working so I ended up using Adafruits Neopixel library. There are still some weird flickering and color issues, but for the most part the library works okay.
~Pin 0 is weird. Not sure what’s up with that but when you have anything connect to it the Lolin32 boots into a different mode so idk if you can use this pin as a normal GPIO

TO DO \ STUFF I PLAN TO DO LATER
~Going to figure out more about the deep sleep mode on these things
~Not sure if there’s a way to monitor the attached battery voltage, but that would be great
~Still haven’t tried servos.
~Something about capacitive touch buttons built in.